Jenn had the idea to post photos we have around our homes and tell the story behind them.  I used to have a long hall with photos lined up mixed in with the kids artwork and other family things.  Now, I just have a few photos out in our smaller house. 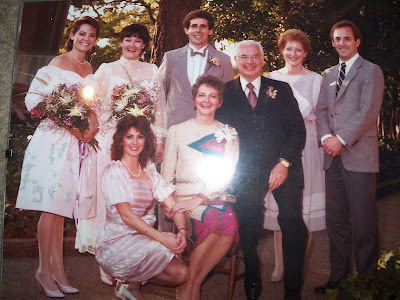 Our scanner isn't available tonight, so I took a photo of the photo on the wall! I will be more organized for this next week...

But since it was our 28th Anniversary Sunday - I thought I would start with the wedding photo I have out.  My parents in the middle, 2 of my sisters and my brother and sister-in law.  Don't we just look so 1984?

We were married outdoors in a small park and had a reception on the patio of a neighboring restaurant.  The colors were pink and gray.  Tom worse a tux because his only suit was tan and we couldn't afford to buy him a new one. It was a small wedding, mostly my parent's friends because we had recent moved to the Bay Area. But some of our friends came from San Diego and my best friend from high school managed to get a quick break from her residency and come down from Seattle. My mom and I made my dress and the whole thing cost about $2500.00 - nothing compared to how things are done now!  But it took.
Posted by Susan at 9:26 PM

What I think that says about both of us is that we were getting married for the marriage, not for the wedding!

I LOVE this photo...the joy in your faces says it all.
Happy anniversary to you both!
Suz

Hi! I'm visiting from Jen's blog. Love your picture and story and REALLY love the Yosemite pictures from an earlier post. It's our favorite place for backpacking but we live soooooo far away. I'm enjoying your blog!

Yes, I would say after 28 years, "it took"! Happy Anniversary! I like simple weddings myself. I bought my dress at Macy's for $200!

Your wedding sounds a lot like mine, although my husband did wear the tan suit. I made my dress, we were married at the courthouse with a small reception in the garden of a Victorian hotel. Probably less than $2500. But it also took! 29 years last month.

Jennifer (Jen on the Edge) said...

Great photo! You all have such joy on your faces.