ONE WEEK WITH NEW KNEES


At this moment a week ago, I was maneuvering myself into a car to be taken home after getting both knees replaced.  My surgery began at about 1:30 pm on Wednesday , January 10, and was completed with nerve blocking catheters in each knee by 4 pm. I was wheeled into a large private room, given the once over, some food and a couple of aids hauled me to my feet.  I got dizzy and threw up the food and was put back to bed!

In typical hospital fashion - not much time went by during the night without a check-in or new medication interrupting the possibility of sleep. My darling future daughter in law stayed with me in the room and kept me company through the night, including assisting the duty nurse help me with a personal issue which I will not chronicle.

The morning brought another try from the PT department.  I shuffled a few steps and got dizzy again - upon hearing I had not eaten in over 36 hours they determined that was needed and scheduled to come back after lunch.  If they brought me breakfast, I don't recall, but a few bites of a chicken sandwich and some tea and I managed to get up, walk with the walker and go up and down a step and was set for discharge.

By mid-afternoon I was tucked into my bed - family standing by to help with my every need - let the healing begin.
Posted by Susan at 3:49 PM No comments:

When I first met my surgeon,  I was hoping that there were some alternatives to try to keep me active and avoid replacement for a few years more.  All of the alt medicine things I had read about and had not already tried were discussed and it was clear that there are no new therapies to swap in at this point.

My question as to whether he would do both knees at once was answered with an immediate yes - that my history and level of fitness made me a candidate.  I spent some time researching and thinking about it. I really did not want to go through it twice, but also didn't want to aim too high if it was going to be much more difficult - why set myself up for failure?  The majority of the literature, both medical and anecdotal, suggests that the first weeks are harder,  but the recovery period then levels out and is the same for two knees as it is for 1.  The therapies and the time invested is
not that different.  So why go through the cost, time and pain twice?  I was in for 2.

Turns out there are not that many of us who do this - at least according to  my little post-surgery circle.  The hospital staff, the nurses,  in home and clinic PT techs all say the same thing - they have only seen 1 or 2 others.

I have no way of knowing if my first couple of weeks was more difficult than it was for others.  I had
excellent care from my family, no excessive pain, seemed to get around just fine and kept being told how well I was doing.  Now, I have a bit of comparing I can do in my PT class and I seem to be doing better than some in my group but only by degrees - which they measure all the time to check our progress toward flexible joints.

The one person who was suffering loudly was a man who had 1 knee done in May 2017 and the other one a few weeks ago - he was miserable. Glad I did it my way.
Posted by Susan at 2:26 PM 1 comment:

NINETEEN DAYS IN - REGAINING MY BRAIN

It looks like this account is going to be one which moves back and forth in time.  Meds, discomfort and lagging energy keep me from  being able to manage a keyboard  or concentrate long enough to complete a post, so I have a few lines down covering the past 19 days.

Today I had my first physical therapy gym class - a sort of circuit class with others in various stages of recovery from knee replacements.  I am the only bi-lateral total knee replacement in the group - going for 2 is a rarity according to the PT staff I have met. My flexibility is very good, got my knee flat back which is a goal and still working hard on the rest of the of the bendy stuff.

What people mean when they talk about the pain of knee replacement is the achy/stiff feeling of the knee and surrounding tissues..  There is occasionally sharper pain, but the constant ache and stiffness is what causes sleeplessness and for me at least, around the clock restlessness - the need to stretch, bend and move to relieve the ache. I have been reducing the use pain meds - Percoset - down to just a few a day. And use my ice machines 4-6 times a day.

But I managed to comlete this whole post - so fewer pain meds are ging me my brain back!
Posted by Susan at 11:51 AM No comments: 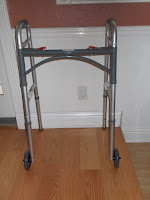 I think I finally checked off the last items on my per-op prep list.  The runners are off the floor to make way for the walker which was delivered this week.  I also installed a couple of raised toilet seats - with handles - very fancy.  Tom said he was going to trick out the walker with decals and a bell, but that hasn't happened yet.

I hope to be rid of it a week or so after surgery anyway.

The house is clean - the laundry done.  Lots of comfy clothes up front in the closet for the long recuperation. 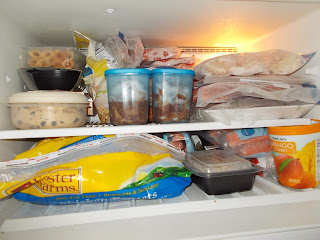 The freezer can't hold a single additional item, the pantry is stocked and a list of about 20 meals is written out with ingredients in house. There is even chocolate chip cookie dough for Tom.

I am very fortunate that my son and his fiancee are coming for the first 10 days to take care of me - she is a nurse about to embark on a doctoral program, so I was lucky to catch her during this particular week.  She has already been giving me advice and lots of lovely gifts of comfy and practical post-op goodies.  As the doctor said to me during my pre-op exam - my son chose well...Not that he's not a fabulous caretaker, himself.
My youngest daughter is going to take over after the kids return to Reno around the 19th.  She will be with me for about a week - then my husband is up to bat.  Hoping I will be pretty self sufficient by then...He is accustomed to being taken care of by me - this is the first time the tables will be turned.

I find I really, really miss my Advil - didn't realize how much my knees and feet hurt without  anti-inflammatory meds.  It has been hard to sleep with the pain and mounting anxiety. Having my prep done will help my monkey brain settle, I hope!

I have two more days at work and should hear from the surgery scheduler tomorrow about my time on Wednesday. So this is happening.
Posted by Susan at 4:02 PM 1 comment:

I have been away from blogging for a long time - a combination of tired of hearing my own voice and just plain tired after full time work with commute.

However, I am embarking on a huge challenge in a few days and thought it might be a good time to
get back on the internet to share my story.  I am going to have both of my knees replaced - yes, at the same time.  Many think this is fool hardy, but I feel up to the challenge.  I have not been able to find much out there about undergoing this surgery and recovery - so I am taking the opportunity to get back into writing with my story.

As my long time "internet friends" know - I had bariatric surgery 5 years ago - I lost 130 pounds and have changed my life in many ways large and small.  I have maintained the weight loss - gotten very into cycling and my doc said I am someone he would allow to do bi-lateral total knee replacement for.  Others in my required "joint class" were jealous, but I explained the circumstances and my hard work to get into shape for this and they were understanding of his decision.

I was also called "young" by an x-ray tech - which blew me away - at 64 I guess I am on the young side for this surgery, but my knees have been bone on bone for about 10 years - I have the bow legs to show for it!!  I hope that I will re-gain the height I have lost when my legs are straight again! See how I am standing on a rock in the photo?

So watch this space - unless I am completely out of my mind with pain and regret I will start posting sometime after  my January 10 surgery date...
Posted by Susan at 3:03 PM 2 comments: