This week for TWT I wanted to hare a Thanksgiving photo but found out that I rarely took photos on Thanksgiving.  Guess all the cooking preoccupied me!  Jenn hosts us every Tuesday and we share family photos and tell our stories.. 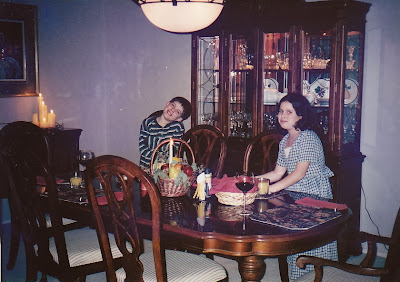 This is 1997 in our house in Bellevue,  Washington. When we moved there I had a lot of work to do on the house, all kinds of wall paper that needed to be taken down, carpets and paint needed to be replaced. Believe it or not the entire house was baby blue and pink!!

It took a while.  Finally I finished the  messy stuff and bought a dining room set.  I think this might have been one of the first times we used it. It was just the 5 of us this particular Thanksgiving - though I didn't get a photo of all of us, I did manage to catch Maggie and Zac putting things on the table just before we sat down to eat.

Happy Thanksgiving to everyone and remember to take pictures!!
Posted by Susan at 7:24 PM 3 comments: Links to this post

Last weekend Tom and I had dinner with my two sisters who live locally and their husbands. We went to our favorite local place, Lokanta, and had lots of drinks and a fine dinner.  We were not ready to call it a night so we wandered down to a local joint which has live music every weekend.  Local bands who play music from the 80's and 90's for the most part - not necessarily that great but very dance worthy.

Well, we "Bradbury" girls had a ball.  We danced ourselves into stiff hips and achy knees and went back for more.

So this week on Time Warp Tuesday,  I m sharing an oldie picture of my siblings including my sisters of the dance floor - Nancy and Polly.  Because in the long run - your siblings can end up being your best friends...not to mention the people you can let your hair down with - or in our case, shake your booty with!

Posted by Susan at 6:52 PM 4 comments: Links to this post

These are the things I am wondering about this week: 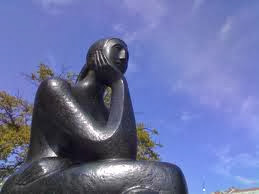 1.)  How is it our country can come up with 20 million dollars at the drop of a hat to send to the victims of
typhoons and earthquakes and other natural disasters in foreign countries but we can't manage to fund food stamps for hungry Americans?

2.)  Have all those people who are complaining that their insurance rate hikes are due to "Obamacare" not noticed that their premiums have been going up every single year?

In fact, in 2011 the average rate increase was 8.8%, in 2012 it was 4.9% and in 2013 it was only 3.3%.  Many say the lower rate increase this past year was because Obamacare will actually create more competition and the insurance companies want to appeal those looking to sign on.

3.)  I heard Sarah Palin was coming back on the scene with a new book to sell - and today I found out it is about the "war" on Christmas.  Her complaint is not that Christmas is too commercial - she likes that part - but that businesses or people (like me) who say Happy Holidays rather than Merry Christmas are infringing on the religious rights of Christians .  So, somehow recognizing and referring to the other religious holidays which occur in the same time period is ruining Christian's  enjoyment of Christmas?  Okaaay.

Since every person I have ever known who is an atheist or agnostic still celebrates Christmas, granted  in the very secular way that Christmas is mostly celebrated, completely undermines her complaint as far as I am concerned. 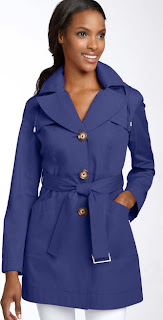 I have had an obsession for shopping for the past month.  Seeing the trees turning and experiencing the cool mornings and evenings has pushed my somewhat excess shopping buttons. For the past 9 year I have worn the same 2 jackets in the cold months.  A reversible rain jacket and a really nice leather jacket.  The combination of warming hormonal changes and a rather limited life made it possible to attend most winter events comfortably.

Now I find myself coatless.  Even the impulse purchased red trench raincoat which I squeezed into once or twice is way too big now.  I have been shivering my way to work in the mornings and layering up when we go out in the evenings.

The threat of rain this week set me in motion.  I poured over the internet to see what to expect in the stores.  Seems that double breasted is very big - but not my favorite look.  The patch work mix of leather and wool is cool but maybe too trendy for someone who plans to wear the same coat for many years to come.  Stunned by the department store prices I was seeing and underwhelmed by the selection in the usual discount stores, I asked around at work and was told to go to Burlington Coat Factory which is just down the road. Somehow it had never occurred to me that a place named "Burlington Coat Factory" would actually have coats... 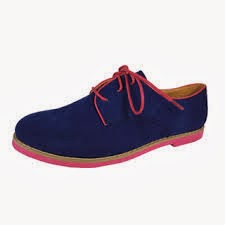 Happily they had great coats at fabulous prices.  After trying on about 20, I bought a rain coat and a dressier wool coat - both from Michael Kors.  I have already shortened the sleeve on the raincoat, but plan to take the wool coat to a seamstress to alter. I go both coats for well under $200.00 so I don't mind paying to have alterations.

My next shopping jones will be some warmer shoes.  My former work environments allowed me to wear more casual clothing and shoes plus had the advantage of being warmer than where I work now, especially because I am in and out of our warehouse.  I am thinking a cool oxford...

Posted by Susan at 7:30 PM 3 comments: Links to this post