Because Jenny's cat wanted to see the pillow I finally made from the needlepoint I finished last fall: 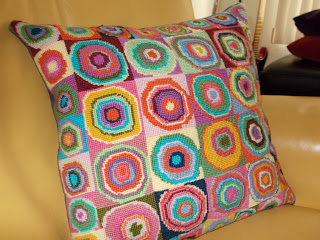 I had some purple velvet left over from covering the seats of my dining chairs about 10 years ago which is the perfect color for the backing - though this photo doesn't really show the colors clearly.  It really looks nice on the yellow sofa!

Now I am working on this canvas: 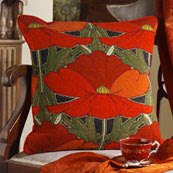 Maybe I will be able to make another pillow next summer!
Posted by Susan at 8:47 PM 5 comments: 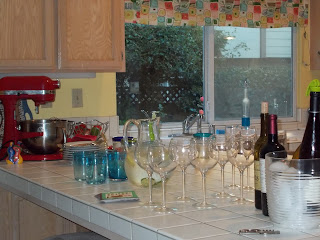 At about 7:15 I was thinking I would be writing a post called "I hosted book club but nobody came." I knew that attendance was going to be low, but since it was supposed to start at 7, I was getting worried that I would be the first hostess to have no club members turn up!

I ended up with 5 of the 18 members here.  We discussed the book "The Light Between Two Oceans" which was a tragic story but very worthy of discussion.  Beautifully written, too.

I tried to keep my food options light and easy - just 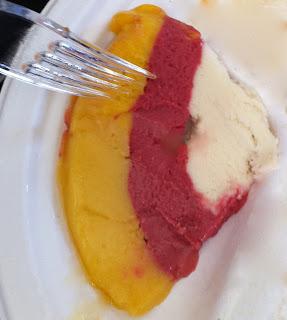 a veggie tray, some nuts and nibbles.  I made an ice cream and sorbet  bombe and some shortbread cookies for dessert. The bombe turned out beautifully and everyone really liked it.  It was perfect because I could make it a day ahead and just had to put out the food and drinks when I came home from work.

Tom and I cleaned the house on the weekend - he helped by waxing the laminate floors which turned out great.  I finally made my finished needlepoint into a pillow. That's the nice thing about entertaining - it stimulates housekeeping!

Book Club hosting done for the year, a clean house and  a long weekend coming up!  A nice end to the summer.
Posted by Susan at 10:33 PM 4 comments: 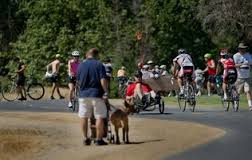 We ride our bikes on trails as often as we can, it is safer than the street and sometimes more scenic.  Most trails are MUTs (Multi-Use Trails) so there are people jogging, rollerblading, walking, being walked by dogs and biking all in some semblance of harmony.

Saturday morning there were a lot more people on the Iron Horse trail than there were last week.  We decided it is because school is starting on Monday so lot's of people were out and about.  This made our ride more challenging.  There are a lot of people who don't seem to know how to behave on a MUT.

Sometimes I think it is a cultural thing because it seems many of them may be immigrants and perhaps in other countries traffic doesn't keep right as it does here. It would seem obvious that they are coming face to face with disgruntled, curious and frustrated people approaching them as they walk on the left and we are all on the right and trying to get around them safely...

Other times it is a simple lack of concern for others - those off leash dog people allowing their pets to dash all over the road; others with dogs on the leash but allowing the dog to wander across the trail (I have seen other trail users tripped and nearly garroted.)  The chatting walkers, two and three abreast without moving in the face of oncoming traffic, the cross country team which seems to think they need to run in a pack, 4 and 5 abreast; the large family on a multitude of transportation forms
wandering back and forth across the road. Don't get me started on people with strollers!

And lest I come off as some sort of trail ogre, I generally remain friendly and just deal with stuff as it comes.  I thanked a family last week for verbally reminding their kids to stay to the right when there were other trail users coming.  I call out "on your left" and use my little bell to warn others I am behind them. I had one older woman grab her meandering husband and pull him out of the middle of the trail.  She said "he can't hear"  I suggested she walk on the inside and keep him on the far right of the trail and she kind of had that "light bulb moment."

That said, I do ride in fear when we are around others on the trail -  that someone will knock me off my bike or run me off the trail  - or worse, hurt someone else.  When we rode in Monterey last month the trail was clearly marked with lines and directions and reminders to keep to the right and leave the center of the trail for passing but people just don't pay attention or care or What?  I don't get it.

Anyway, we had another good day on the bikes.  I can feel  Fall coming.  Soccer teams have replaced the baseball and softball teams out on the fields.  Acorns are starting to drop and the leaves are losing their greenness.  The first apples arrived at the Farmer's Market and a big garden we pass all the time has some whopping big pumpkins on the vines.
Posted by Susan at 5:35 PM 5 comments: 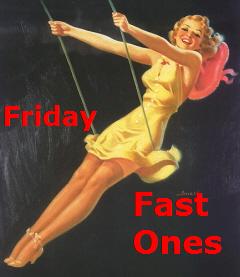 1.)  What is your Food Spirit Animal?  Mine is Sriracha:

Just like Sriracha, you are spicy, exotic, and sassy. You likely have a sarcastic sense of humor, and are well-cultured. The only think you like better than traveling the world is going on crazy adventures along the way.

Check out the quiz for yours here.

2.)  According to a Public Policy Polling survey, 29 percent of Louisiana Republicans say President Obama is more to blame for the botched executive branch response to Hurricane Katrina while just 28 percent blamed George W. Bush. A plurality of 44 percent said they were unsure who was more responsible, even though Hurricane Katrina occurred over three years before Obama entered the presidency when he was still a freshman Senator.

3.)  New research finds that copper in amounts readily found in our drinking water, the foods we eat and the vitamin supplements we take likely plays a key role in initiating and fueling the abnormal protein build-up and brain inflammation that are hallmarks of Alzheimer's disease.

The LA times article  outlines the study and findings.  I can't help but recall that in the late 1990's everyone was getting rid of their aluminum pots and pans, not buying deodorant,  baking soda and other products which had aluminum in them because the scientist thought aluminum was the culprit behind Alzheimer's.

Sometimes I think these studies should not be reported while still in progress.

Time Warp Tuesday - the summer edition...Hosted by Jenn, we share our family photos and tell the stories behind them every Tuesday!

This week I am going back to 2003 - the last year Maggie played on the traveling softball team.  The girls made it to 3rd place in the Western Nationals and we went to New Mexico for the tournament.


A couple of these girls went on to play softball in college and one - the girl on the lower left plays on the US National Team!

We spent not only the regular season with most of these girls and their families and 4 long hot summers going from tournament to tournament.  We got very organized and pretty close.


We supplied about a ton of sunflower seeds, tootsie pops and red vines.  Gallons of sunscreen, hand sanitizer and a fleet of coolers full of snacks and water.  I always had Advil to spare and we were lucky that there were some other little sister for Ally to pal around with.  They were memorable summers and everytime I pass the sports park it gets me to reminiscing.

THE LONGEST RIDE EVER

Tom decided I needed to expand my biking horizons so last week we went on some unpaved trails, but didn't get too far because of this: 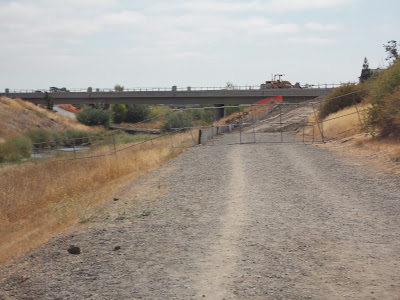 Construction on the bridge closed the trail.  Riding on gravel is really nerve wracking, so I am not eager to do that again! 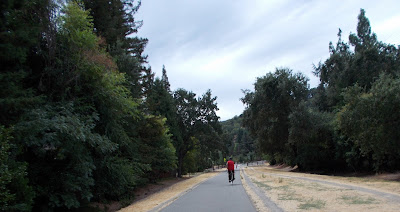 Today he decided I was ready for more miles so we went from Pleasanton to Walnut Creek on the Iron Horse trail. The weather was odd - thankfully we had some low clouds most of the day, with little direct sun. It was humid but not terribly hot.  Six miles or so of the return trip was up a 2-3% grade which really took a toll on my knees. Then at about the 28 mile point the wind started up so I was pretty miserable. 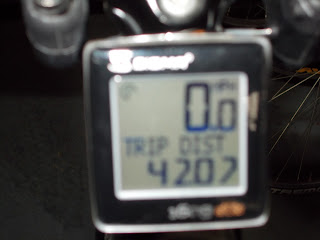 After about 5 hours of riding (a stop at the Farmer's Market and another one for a snack) and a documented 42 miles,  we made it home.  I went straight for the Advil...

Then we grabbed our  swim suits and headed for the Jacuzzi at the gym.  The hot, bubbly water and the Advil did their work and I was no longer feeling so sore,  After a shower we went out for a Margarita  and I felt much better!
Posted by Susan at 8:11 PM 5 comments:

I went away and now I am back - had to put in a lot of extra hours to catch up at work and helped Ally move from one apartment to another in San Francisco over the weekend. Caught up with Dexter and the other shows on the DVR.  Almost all the laundry is clean and ironed.  Today I am finally feeling like I am back in the groove.

I was up in Idaho for a few days visit with my sister at her home in Coeur d'Alene, then we went down to Boise for a family gathering celebrating, among other things my parents's 80th birthdays and 60th wedding anniversary. The last time we all got together (or at least almost all of us) it was in 2003!

My brother and his wife hosted us in their lovely home and yard.  Among the guests was my mother's cousin Mitzi whom I remember as a child because she and her husband had horses!  They are in their 90's now and living in the retirement community my parents have chosen to move to next year.

There were also 11 of the 14 grandchildren present and the California cousins had a good time catching up with the Idaho contingent.


We all swear we won't wait so long to get together again, though it is harder once the kids are grown up and working and living all over the country... when the weddings start I am sure we will be gathering again.  Not that we are in any hurry for that!

Back for Time Warp Tuesday - still tired from the trip and the 50 hours I put in at work since then trying to catch up!!  Check in with our hostess, Jenn at Juggling Life, to see who else is playing this week!

The last time we got the whole clan together in the summer was in Tahoe in 2000.  I am sharing a couple of those snaps with one from this summer.  I am one of 5 children and we have had 14 kids between us - now ranging in age from 31 to 12!  We had 11 of the 14 in attendance for the family party! 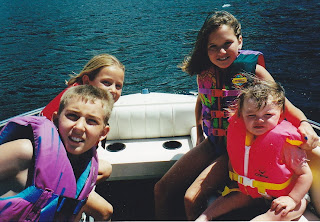 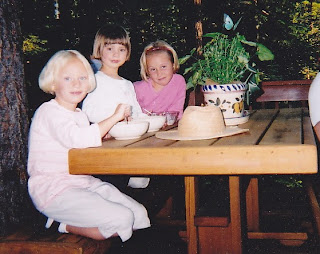 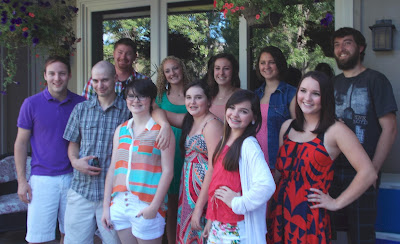 In the second photo above features the three girls in the back row.
Posted by Susan at 8:11 PM 3 comments: