I have not experienced grief in a go to bed for days, weepy, can't cope way.  I moved into the what needs to be done zone and stayed there for weeks - to the point that I wondered what was wrong with me.  Am I normal?  I loved my husband, he died.  Shouldn't I fall apart at least a little bit?

Then a cascade of problems started to set in - and I found I was fine putting out fires but unable to cope with simple things.  A notice from the bank that required me to change my log-in just threw me - I couldn't think of something new.  The woman on the phone nicely came up with something until I could think straight. A CPA I called for advice told me what killed him probably was the financial stress he was under and I hung up on her but was so shaken up I didn't make phone calls for days.  Paperwork for the new bank account I opened had to be corrected because I put in that I was married.

Driving through the city where we used to live brought on tears.  Seeing people out on their bikes brought waves of memories. Passing by things I used to buy for him at the store made me sadder than planning meals for one.

After moving to a new state, I have not had many of those moments, until today.  I went to donate 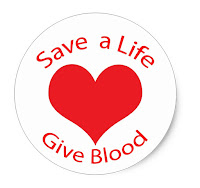 blood - which is the thing I told people to do when they asked how they could help following his diagnosis and death.  I  didn't really give it much thought until I saw all the people there doing this generous life giving thing.  I had gone prompted by the Covid crisis, but realized once there that the hospitals are still full of leukemia patients in need of this precious resource only we can provide.

I had strong mixed emotions all day.  The loss. The life sustaining gift we can  give.
Posted by Susan at 4:36 PM