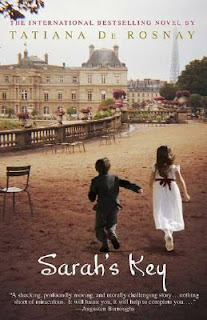 A friend recommended I read Sarah's Key by Tatiana de Rosnay. It is the story of a little publicized event in Paris during WWII. France police rounded up thousands of Jewish families and placed them in the Vélodrome d'Hiver outside the city, then transported them to camps in the countryside before their final transport to Auschwitz from which none returned.

The story is primarily from the point of view of an American ex-pat; a journalist and mother living in Paris with a family connection to the events of 60 years before. She makes much of the fact that the French authorities were responsible for the round-up, imprisonment and transportation of these families, including thousands of children. The story is engrossing and the switch from the story in 1942 to present day is smoothly told. Overall I enjoyed the book.

However, I found it very odd that this woman was so astonished and upset about the complicity of the French people in the arrests, the confiscation of their personal goods, their homes and businesses when a similar event had gone on by government decree in the US at the same time.

The round-up and internment of Japanese nationals and Japanese Americans was ordered by the President of he United States and carried out by our military. These families were also removed from their property, businesses and homes and transported to live in tar paper shacks surrounded by barbed wire and armed guards. Granted they were not shipped off to die, but many did under the rather primitive conditions of the camps.

Of the Holocaust we say "Never Forget". I think the same should be said of the interment of our own out of fear, prejudice and ignorance.
Posted by Susan at 8:08 PM